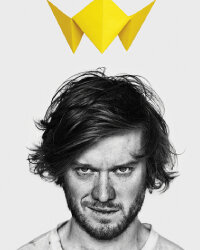 × Inspired by the visual language of silent film, this wordless adaptation of MACBETH flirts with boisterous theatrics and melodrama, drawing audiences into a frantic and hilarious race for power. An accelerated, visceral and bloody version of Shakespeare’s doomed couple’s hardships, MACBETH MUET uses bodies and fake blood to deconstruct Shakespeare’s tragedy. The story unfolds in a world devoid of morality, where human lives are as disposable as styrofoam cups, while the actor-puppeteers perform perfectly choreographed feats backed by an intense soundtrack and a surprising choice of music.