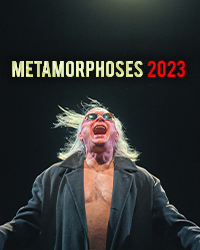 “Everything changes. Nothing dies. The soul wanders here and there, occupying whatever body it chooses.”

Survival is at the core of METAMORPHOSES 2023, a bold and contemporary adaptation of Ovid’s epic ninth-century poem. Ovid paints the landscape of a cruel world that could be our world: rape, revenge, gruesome violence, and women’s rage and resilience. To be alive is to be constantly changing, constantly transforming.

“I love Ovid’s philosophy of life as a long wave of transformations: no death, no birth, no beginning, and no end, but an endless possibility to flee, to never be pinned down to one identity.” Michele Smith, Director

METAMORPHOSES 2023 is post-mime, it is illusion, it is spoken word and silence. And it is a dialogue between European Mime and Bharatanatyam dance, incarnating the original text’s mythic elements.

An innovative, physical theatre company, which has enjoyed international acclaim, Theatre Smith-Gilmour, co-founded by Michele Smith and Dean Gilmour, is committed to creating a theatre that mobilizes the imagination.

We're sorry, the ticket(s) you wanted to Metamorphoses 2023 for the performance on Friday, March 24, 2023 at 7:30 PM EDT have just sold out or the event is no longer available for sale via the internet if the curtain time is nearing.